LEAF TEA OR SOLUBLE TEA? HERE ARE THE 101 FLAVOURS FOR YOUR SUMMER!

It’s time for tea at 101caffè: do you prefer leaf tea or soluble? Classical or trendy? With or without sugar? Hot or cold?
Tea appears to have infinite forms, but they all have one common denominator: the vast selection which sets apart the 101CAFFE’ range, not only for coffee but also for tea which, as is the case for coffee, enjoys a popularity which is both ancient but also rejuvenated in its flavours and forms.

The world of tea, like that of coffee, is very complex, so we want to make it as simple as possible so that you can enjoy any type of tea simply and naturally.

We divide tea into these most common colours: black tea, green tea, white tea, red tea.
These are the most popular teas and have a lead role in breakfasts, in post-prandial moments as an alternative to coffee, or in the afternoon, depending on the customs of the country in which it is drunk.

The properties and colours of tea

There are a truly an enormous number of properties and flavour notes featured in tea, and they vary according to the type of leaf; the most well-known are those in black tea, green tea, white tea, and red tea.

Black tea has a highly beneficial ability to invigorate, and is one of the most widespread beverages because of its ancient tradition. It is the tea typically drunk for the English custom of “5 o’clock tea”.

Green tea on the other hand, has become known in the West in recent times, because of various medical-scientific articles on its beneficial effects for the body, especially its ability to combat the dreaded free radicals, responsible for ageing and other maladies of our times.

White tea, less widespread, is produced only in China and is obtained by using the first shoots of the plant, coated in a white fluff. Its beneficial properties are especially associated with the presence of large amounts of polyphenols, beneficial at cardiovascular level and to combat ageing.

Rooibos tea, called “red tea” because of its scarlet colour, is made from leaves which in reality belong to the leguminous plant family, but is nevertheless known as tea. It is particularly rich in mineral salts and does not contain theine (the caffeine in tea); because of its pleasant and sugary flavour, Rooibos red tea is a beverage which is even suitable for children.

Ancient traditions and very modern delivery systems: a winning combination that 101CAFFE’ has been able to make use of in order to please all those who wish to explore the world of flavours and the benefits of tea but with speed, cleanliness, and perhaps trying new flavours and floral combinations which generate different flavours every time.

As we have already described in the article on our blog , the 101CAFFE’ selection of teas ranges from classic filters to be immersed in hot water, to teas in pods and capsules for the various coffee machines.

Although many people like to taste the natural flavour of coffee and tea, many others like to add a little sweetness with sugar or another sweetener, such as honey or agave juice: the 101CAFFE’ range satisfies the former with an assortment of leaf teas (natural and perfect for connoisseurs) and the latter by a selection of teas for all tastes and all capsule machines, from Nespresso® to Nescafè® Dolce Gusto®, Lavazza® and pod machines such as Frog®, Ariete® and similar.
In both cases (leaf tea and solubles) high quality is guaranteed, and the utmost attention is paid to environmental sustainability. Indeed, the number of compostable pods and capsules and organic products in the 101CAFFE’ range is constantly growing.

The leaf tea consists of dried and crushed tea leaves inside the filter, pod, or capsule. In the case of the portioned product (so, pods and capsules) the coffee machine sends the water inside them at a set pressure, extracting their essences, aromas and all their properties, thus obtaining a tea equal to that in the filter.

Instant tea, which by its nature cannot be contained in either filters or paper pods but only in capsules, is composed of soluble elements, including tea extract, which vary according to the recipe and flavour.
The water from the coffee machine goes into the capsule and dissolves the mixture.
The result is a cup of tea with more varied flavours such as, for example, Peach and Ginger tea, one of the most interesting products in the 101CAFFE’ range for Nescafè® Dolce Gusto® machines.

This is a soluble preparation composed of dried extracts as in black tea, dehydrated peach juice, ginger and ginseng and extract of aloes.
Cane sugar gives this a sweetness which nicely balances the typically spicy flavour of the ginger. The resulting delicious beverage is perfect for drinking either hot or cold, including with ice.
In fact, many 101CAFFE’ customers tell us they like to put their preferred tea, including Peach and Ginger tea, in the fridge to chill for several hours to enjoy it cold.
The long production time enables one capsule to deliver a standard size cup of tea in a simple, immediate and clean way.

101CAFFE’ soluble and leaf teas for the most common machines on the market embrace traditions and recipes originating in both the East and the West, from the classic lo the more unusual.
English Breakfast tea and Organic Earl Grey tea are two examples of more classical teas in the English tradition, as is the Ceylon tea for Nespresso machines produced using specially selected black Ceylon tea leaves.
Another great classic in the world of tea, found in all cultures but a typically western custom, is tea with lemon.

Tea with lemon and with peach: amongst our most widespread customs

Tea with lemon is one of the favourites, whether drunk hot, for breakfast, or drunk in various ways in the course of the day.
For this reason, 101CAFFE’ has extended its range with varieties which are very different from each other: for Lavazza a Modo Mio system coffee machines, for example, you can easily find on our shop shelves black leaf tea with citronella, lemon zest and lemon myrtle, soluble tea with dehydrated extract of lemon and sweetened with sugar, decaffeinated lemon tea, a beverage to enjoy either hot or cold at any time of the day.
The Lim Lim tea, with lemon and lime, is particularly pleasant, with a citrusy and exotic flavour, perfect for drinking cold with ice.

The other great summer classic is peach tea, to which 101CAFFE’ gives a front row position on the shelves of all shops: instant, very quick to prepare by simply using a capsule and, above all, it’s good – no – very good! And it can be made in the most common coffee machines such as all Nespresso®, Nescafè® Dolce Gusto® and Lavazza a Modo Mio® machines.

Tea from West to East

For lovers of eastern flavours, 101CAFFE’ has a truly rich range: Spicy Chai latte tea, based on milk and black tea and aromas such as cardamom, cinnamon and ginger: a recipe made simple and instantaneous thanks to the single-dose capsule.
Also with eastern flavours, we have Karak tea with saffron and cardamom, Garam Masala tea, from the Indian and Pakistani tradition, with black tea, turmeric, cinnamon, ginger, and Cayenne pepper, available in a soluble version in capsules for Nescafè Dolce Gusto machines and in compostable filters for those who like the ritual of serving tea in the classical way.

Straddling East and West there is always a cup of mint tea, which 101CAFFE’ has conceived in both leaf and soluble versions.
The properties of mint are among the most interesting in every culture on our planet, and so our range offers a wide range of options both in the world of teas and that of infusions and tisanes.
Particularly fresh and thirst quenching, mint holds a place of honour not only in many teas but also in tisanes in our range, such as the Marrakech tisane, the Riposo (Sleep) and the Dopo Pasto (After Dinner) tisanes, the Mint Matcha tisane and many others.

So many leaf teas and instant soluble teas for every need and every taste, for those who like it natural, or organic, convenience, for food-lovers and health enthusiasts, for those who like the complete ritual of preparing tea and those who want great flavour but fast: 101 flavours for your summer await you in all 150 shops in Italy and in the world, because wherever you may be, it’s time for tea at 101CAFFE’. And online, too! 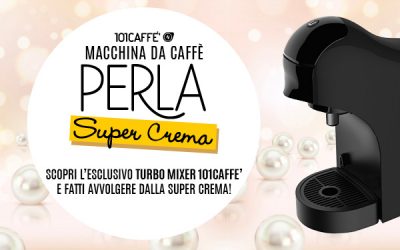 101PRODUCTSThe new PERLA SUPER CREMA coffee machine: turbocharge your coffee! In the Italian tradition, there are many ways to prepare and enjoy coffee, but even though people have different tastes, we almost all agree on one thing that a cup of coffee simply can’t do...

END_OF_DOCUMENT_TOKEN_TO_BE_REPLACED 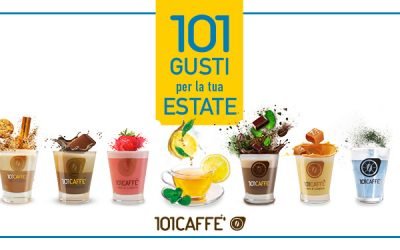 101 TASTES FOR YOUR SUMMER

101PRODUCTS101 TASTES FOR YOUR SUMMER The cool transparency of the ice, the colors of an unforgettable summer, the taste of the freedom to choose among flavors with 101 different facets: sweet, bitter, intense, light, full-bodied, classic, special.This is the world we...

END_OF_DOCUMENT_TOKEN_TO_BE_REPLACED

PASSION FOR GINGER: Benefits and recipes

101PRODUCTSPASSION FOR GINGER: Benefits and recipes Whether because it’s in style, for wellness, for the taste or for the sake of science: ginger has more and more of a place in the pantry of Italians, who appreciate both its many nutritional properties and its...