101CAFFE’ new opening in Bergamo: when action wins over fear 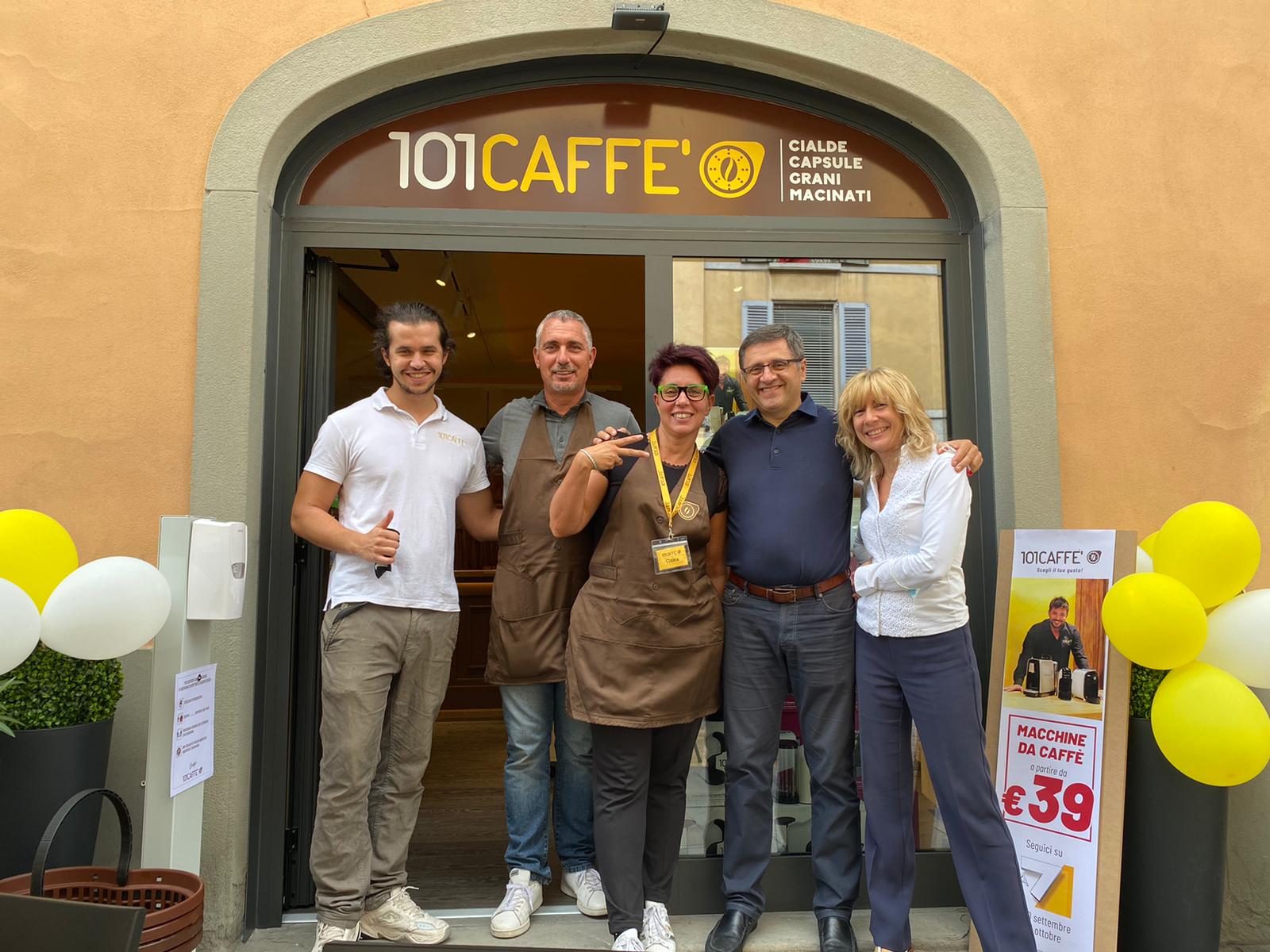 If we go back for a moment to the days when Fabrizio and Cinzia contacted us expressing their interest in opening a shop in Bergamo, a city in the Lombardy region, north of Italy, we still get chills. It was April and Covid-19 was claiming an impressive number of victims in that city.

In the meantime, 101CAFFE’ headquarters was working (some people from offices and others from home) to let its stores remain open and carry out their activities (authorized by decree, since dealing with food ) most effectively and safely, thanks to home deliveries. All in full compliance with the anti-contagion rules.

In that particular period, we used a wide training program for our network and informed on our franchising proposal, and it was precisely in April that Cinzia and Fabrizio contacted us to have more information about the franchising formula.

But we reveal now the end of this story: 101CAFFE’ new store in Bergamo opened last Saturday, on September 19th, with Cinzia and Fabrizio, our new brother and sister franchisees, a real rebirth for this city, also thanks to people like them.

A new opening in Bergamo that means courage, desire for redemption, as well as exceptional people (Cinzia and Fabrizio) who took advantage of the lockdown, realizing their professional achievement.

“Thanks to technology we have intensified interpersonal contacts with tools such as Skype, Zoom and Google Meet, in the real spirit of “distant but united”, said Umberto Gonnella 101CAFFE’ founder and CEO.

It was on Skype that we first met Cinzia and Fabrizio. An informal but heartfelt talk, where we spoke about business, future, family, franchising, new equilibrium in the retail world. These future franchisees have easily identified the new and interesting perspectives of the neighbourhood store, which allows customers to avoid crowds in complete safety, also thanks to home deliveries. 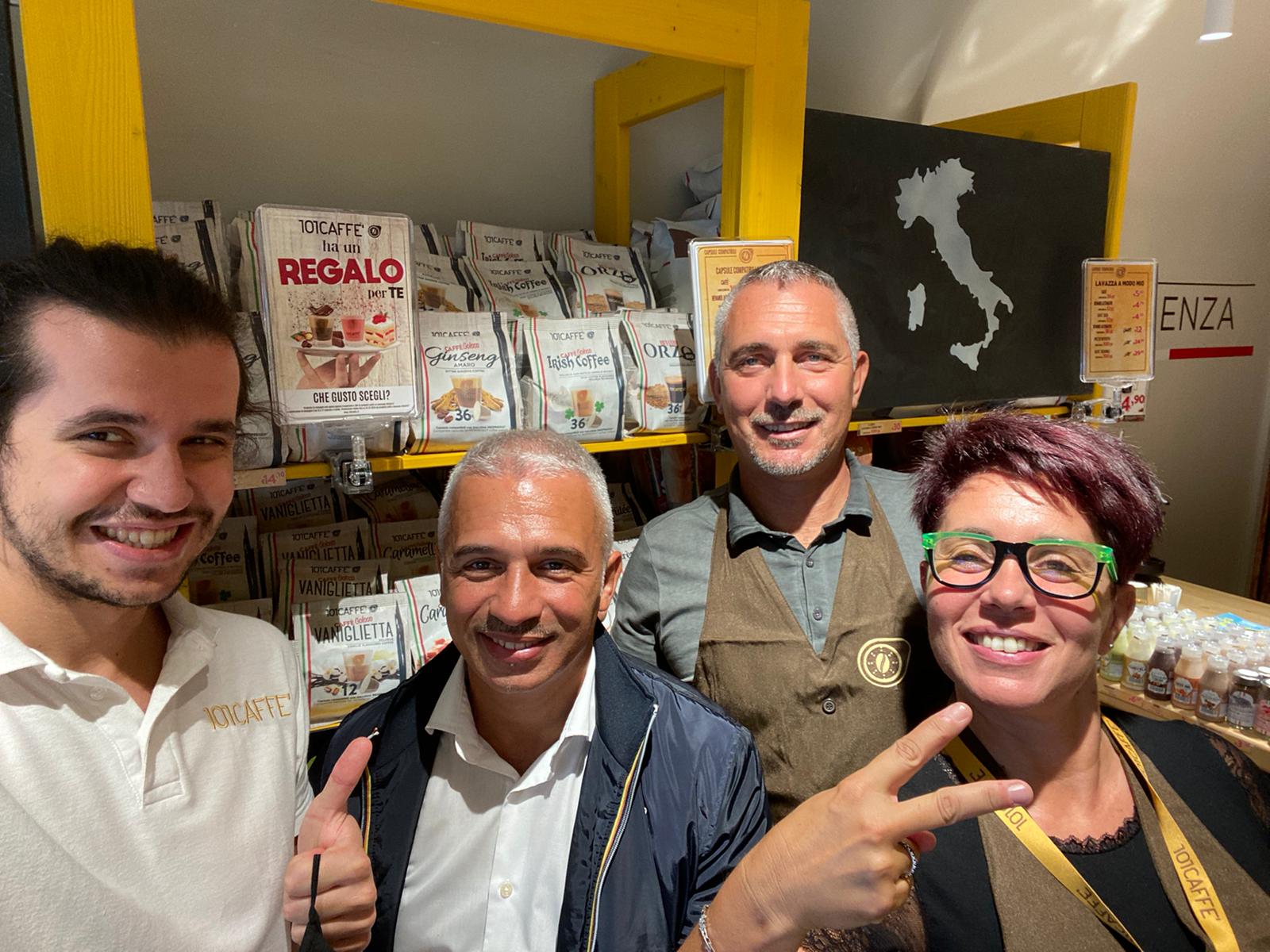 101CAFFE’ store in Bergamo is located in the central via Borgo Palazzo 43, near Piazza Sant’Anna, and already the day before its inauguration it became known for its light, warmth, aromas and joviality of the owners.

“We have made our dream come true and at the same time we are helping to give back to our city the energy and enthusiasm it deserves” are the sincere and passionate words of Cinzia and Fabrizio.

Both grew up in the business: Cinzia began to work as a contractor at the age of 18 and after a long experience in clothing sales she wanted to change her life by embracing a project that could put people “at the center”.

Fabrizio comes from the construction sector, with over 30 years of activity, and he is too eager to realize himself. The period of forced detention has favored them in the meticulous search among the many opportunities and in the selection of the most reliable ones in franchising.

“It was love at first sight: after a long search I threw myself headlong into 101CAFFE’, attracted by the project, the history and the people I met in this company (even if at first only online); the information I received made me understand that 101CAFFE’ is a serious company and I knew that it was also distinguishing itself by being close to its franchisees, especially in those terrible moments, supporting them with all kinds of means, and that the shops were working very well. I therefore decided to abandon that job that had been a bit tight on me for some time, certain that I could achieve my entrepreneurial ambitions with these people “.

Cinzia and Fabrizio thus become part of the great 101CAFFE’ family, in an unprecedented historical moment, which has not stopped the company and its network of stores, now more than 120 in Italy and abroad, which have continued to work by spreading the values ​​that distinguish the brand: territoriality, coffee culture, freedom of choice, Italian style.

The day after the opening of Bergamo store, 101CAFFE’ national TV campaign started on-air on LA7, which will last until 31 October: “I think we could not toast their inauguration more strikingly” said Umberto Gonnella with great satisfaction and added: “It is the coincidence of two important events that have highlighted how strategic action wins over fears and generates growth and opportunities”.